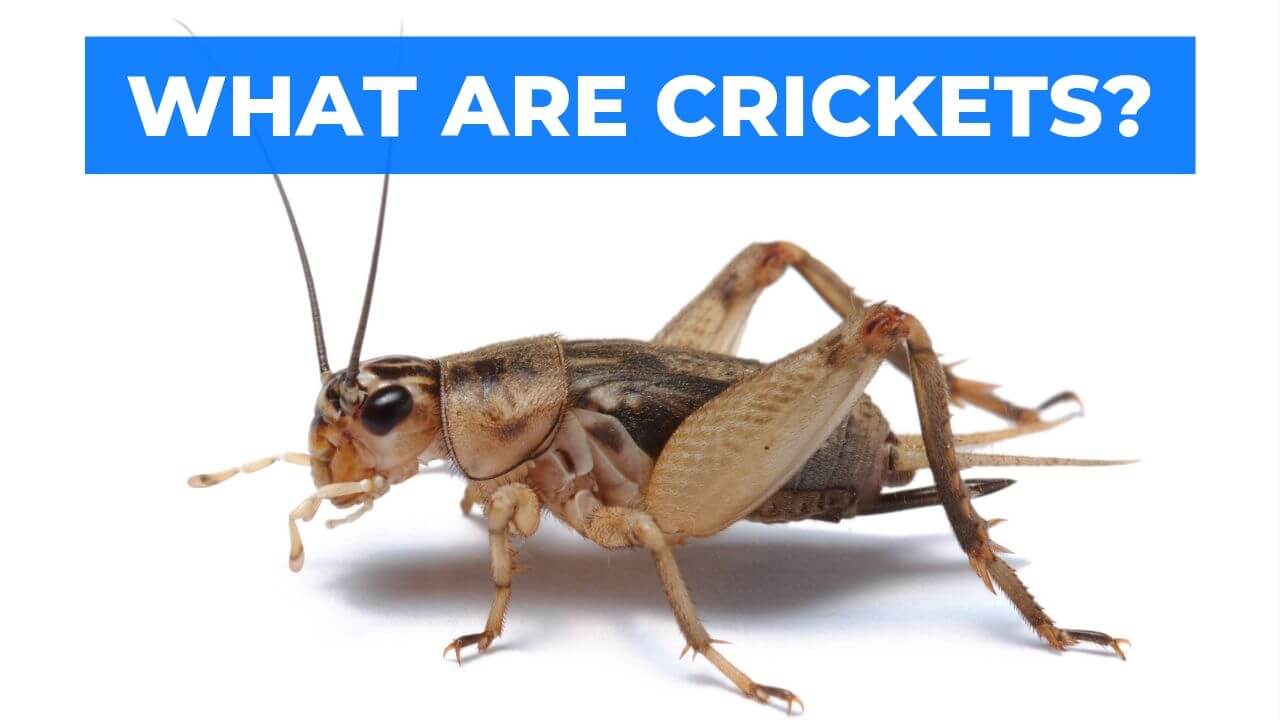 Contents hide
1 What Are Crickets
2 Baby Crickets
3 Where Do Crickets Live
4 What Do Cricket Eat
5 Do Crickets Sing
6 Anatomy of a Cricket
7 Common Cricket Species
7.1 Field Cricket
7.2 Mole Cricket
7.3 Camel Cricket
7.4 Dune Cricket
7.5 Cooloola Monster
8 Life Cycle
8.1 Egg
8.2 Nymph
8.3 Adult
9 Chirping
9.1 Dolbear’s law
10 Crickets as Pests
10.1 Removing Crickets from Your House
10.1.1 Harborage Removal
10.1.2 ExclusionSeal all potential entry points, such as cracks in the foundation, and gaps around doors and low windows.
10.1.3 TrappingPlace glue traps in the areas of the room where chirping is heard, and along with areas like walls, windows or doorways.
10.1.4 Diatomaceous EarthApply Diatomaceous Earth both indoors and outdoors. This is a natural abrasive, white powder that wears through the cricket’s outer shell causing it to dehydrate and die.
10.1.5 PesticidesSpray pesticides along with windows, corners and basement areas.
10.1.6 Outdoor LightingCrickets are attracted to lights. Replace the outdoors lights with low-pressure sodium vapor lamps or yellow incandescent bug lights.
10.1.7 Allow Natural Enemies to ThrivePlenty of active enemies such as lizards, birds also help to keepthe cricket population in check.
11 Crickets as Pets
11.1 Cricket House
11.2 Food
12 Crickets as Food

Crickets are insects. They have long antennae. They have an exoskeleton. They hear with an organ on their front legs. They breathe through holes along their sides. Most crickets have four wings, but they almost never fly. They are also among the best jumpers in the animal world.

Baby crickets are called nymphs. They look like small adult crickets. Crickets molt several times as they grow. The new exoskeleton is soft and pale. It hardens and gets darker as it dries.

Where Do Crickets Live

What Do Cricket Eat

No, they do not. They make a chirping sound by rubbing their front wings together Male crickets chirp to find a mate. Each cricket has its own chirp. Some crickets make holes in leaves. The holes make their chirps sound louder. Crickets chirp faster as the weather gets warmer.

People have always had a special affection for crickets. Some have been made famous in literature. including the house cricket in Charles Dickens’ Cricket on the Hearth. and the talking cricket in the story of Pinocchio.

Anatomy of a Cricket

Anatomy of Crickets: Crickets and grasshoppers are found all over the world. By looking at their shapes we can tell that they are insects. Their bodies are divided into three main parts: the head is the smallest part and is found at the front end. The middle part is called the thorax. and it holds the three pairs Of legs and two pairs Of wings. The largest section is called the abdomen This is often hidden under the wings. The bodies of crickets are made of a hard. light material called chitin (kite-in). This forms a tough “skin” or “shell.” which acts as a skeleton and gives the insect its shape. Insects do not have bones’ inside their bodies.

Crickets have long, narrow bodies. All have rounded heads and squarish thoraxes. The head holds the eyes. a pair of “feelers,” or antennae. and a largemouth. Every cricket has a pair of large eyes on its head. These are called compound eyes because they are made up of many tiny parts. each of which sees only a fraction of the overall picture. Their compound eyes can also see colors. Many crickets and grasshoppers have two or three tiny, simple eyes on top of the head too. These cannot see a “picture,” but can tell night from day.

The thorax is covered by a large plate. or shield, which is called a pronotum. This acts like armor in protecting the top of the thorax. It also covers the back of the head and base of the wings. All crickets have two pairs of short legs and one pair of huge, back legs. Most grasshoppers, and some kinds of crickets. have two pairs of long wings. The straight. leathery pair Of front wings usually covers the finer. more delicate back pair. The hind wings are much bigger than the front. and are kept folded when not being used to fly Other crickets and grasshoppers have very short wings.

The abdomen is made up of ten rings. or segments. of hard armor. These segments help the insect to bend its abdomen while still protecting the inside Of the body. The abdomen contains the gut and special parts that make eggs and sperm cells.

Crickets usually have long antennae. often longer than their bodies. and short wings. Some kinds have such short wings that they cannot fly. The female cricket has a long. pointed “sword” sticking out from the end of her abdomen. This is called an ovipositor and is used to squeeze eggs into cracks and crevices.

Mole crickets are odd-shaped brown crickets that burrow underground. They dig with their front legs, which are like big, clawed spades The bodies of many kinds are covered with fine hairs. They are present in many parts of the world and is often a pest in fields of root crops.

The North American cave or camel cricket is a wingless, humpbacked cricket that lives under stones or in caves during the day. It comes out at night to hunt for small and often dead insects and is unusual because it cannot sing, and has no ears.

By day, the dune cricket stays in an underground burrow in the hot, dry Namib Desert. It only comes out at night, when the air is cooler. The dune cricket hind feet are flat lobes fringed with hairs. They keep it from sinking into the sand.

In 1976 a new kind Of cricket was discovered in Queensland, Australia. Its appearance is so strange that it was called the Cooloola monster. It lives underground, Only the males come to the surface after rain at night.

Males chirps during the mating season in order to attract females and to let the females know where they are located. Crickets go through three stages of the life cycle: egg, nymph and adult.

Nymphs look like a tiny version of adult crickets. The main difference is that it has no wings and the female does have an ovipositor. Nymphs go through 8 to 10 skin changes. This process is called molting. A nymph starts to develop wings at about 1 month of age.

In about 45 days, the small crickets get to adult size. Its wings are fully developed. The primary goal of adult cricket is to eat and reproduce. Adults generally live between two to three months.

Male crickets are the only ones that chirp. Male crickets chirp to find a mate. The cricket’s chirping sound does not come from his mouth, but from his raised wings. Male crickets make a chirping sound by rubbing their front wings together. One wing has a hard, ridged vein. which we call a file. The other wing has a hard ridge which is called a scraper. By quickly rubbing the scraper across the file a sound is made. Every type of cricket has a different song.

Crickets are usually silent when the temperature falls below 55 degrees Fahrenheit. When they are making their music they vary its regularity and pitch according to the weather. Spowy tree cricket speeds up or slow down intervals between chirps with the rise or fall of the thermometer.why he is sometimes called the temperature cricket.

Dolbear’s law states the relationship between the air temperature and the rate at which crickets chirp.
It was formulated by Amos Dolbear and published in 1897 in an article called “The Cricket as a Thermometer”.

The formula for temperature Tf in degrees Fahrenheit from the number of chirps per minute N60:

The mole cricket lives almost exclusively in underground digging tunnels. Their main tunnels are used for feeding and for escape. It causes great damage by continuous burrowing and damaging the roots of agricultural crops. As they tunnel through the top few centimeters of soil they push the ground up in little ridges, increasing evaporation of surface moisture, disturbing germinating seeds and damaging the delicate young roots of seedlings. The adults (2-3 cm in length) feed on roots, tubers, underground stems, and ground fruits. In their native lands, mole crickets have natural enemies that keep them under control. This is not the case when they have been accidentally introduced to other parts of the world.

Removing Crickets from Your House

Exclusion
Seal all potential entry points, such as cracks in the foundation, and gaps around doors and low windows.

Trapping
Place glue traps in the areas of the room where chirping is heard, and along with areas like walls, windows or doorways.

Diatomaceous Earth
Apply Diatomaceous Earth both indoors and outdoors. This is a natural abrasive, white powder that wears through the cricket’s outer shell causing it to dehydrate and die.

Pesticides
Spray pesticides along with windows, corners and basement areas.

Allow Natural Enemies to Thrive
Plenty of active enemies such as lizards, birds also help to keep
the cricket population in check.

Crickets are kept as pets in many parts of the world; their cages are often very beautiful. Some crickets are chosen for the musical tone of their chirpings. One kind, in Asia, is known as Kin Chung, or golden bell. Others are kept for their fighting ability. In many places, a cricket in the house is thought to bring good fortune.

An empty fish tank or a tall, clear glass jar with an inch or so of soil and a few dry leaves in the bottom makes a satisfactory cage. Put a cover on it made of perforated cellophane or fine-mesh wire netting.

A male and a female get along well in a cage, but two males may fight to the death, and one female has been known to kill another. Several field and ground crickets will live together happily in a large cage, each chirping his own song.

You can feed your cricket fresh fruit, vegetables, seeds, and grains. If crickets are not kept well fed they will prey on one another. Most insects need to drink, so put a lid filled with water into each container. Be sure to change the water every day.

Entomophagy is the practice of eating insects. Worldwide, insects are part of the traditional diets of at least 2 billion people in around 100 countries. By the year 2050, the world‘s population will have reached 9 billion people. There has been promising research on the nutrition, safety, and sustainability of crickets as food.

There are many species of cricket consumed worldwide, such as the field cricket(Gryllus genus), and the house cricket (Acheta genus). The most common insect integrated into food is the Cricket, usually dried and milled into a powder usually called cricket flour. It is because of the high protein content of crickets that they can be used to make protein bars, cricket flour can replace the wheat flour so commonly used in food products.

How to Breed Crickets at Home