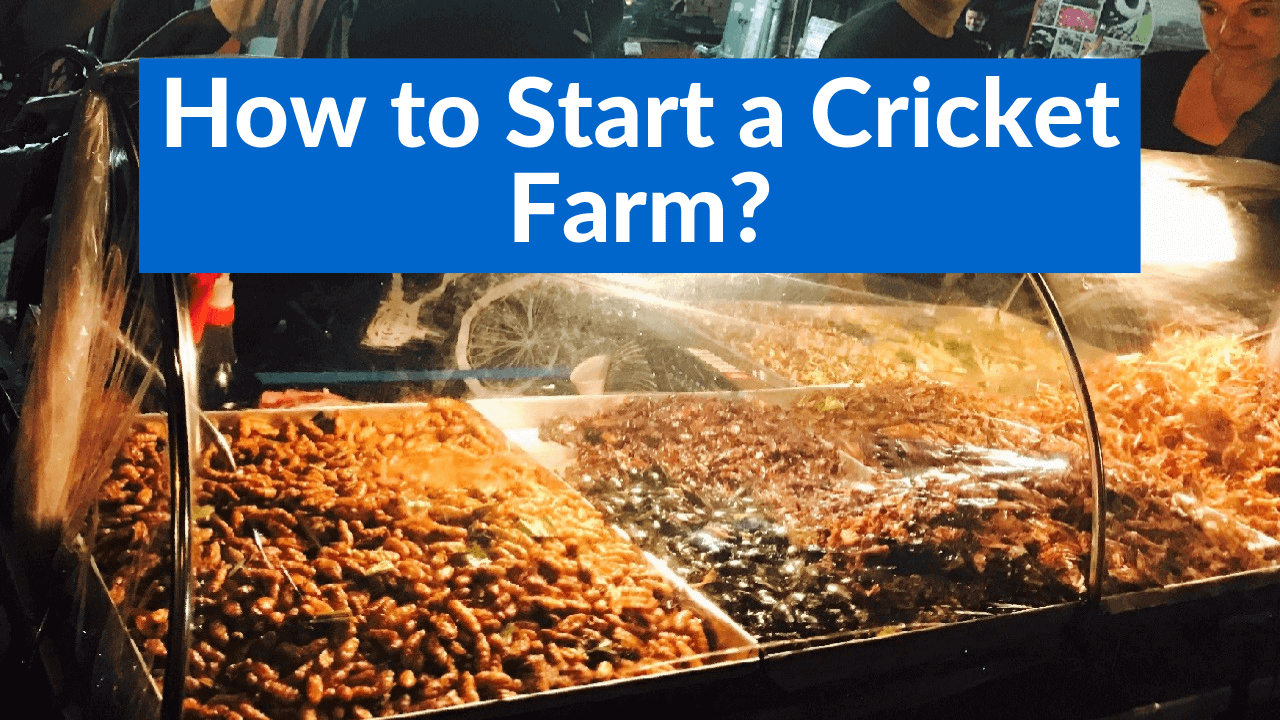 How to Start a Cricket Farm: For decades, people have been raising crickets both commercially and at home, as a feed for their pets, particularly for their reptiles. Crickets are protein-rich and nutritious. Many reptile owners choose to raise crickets themselves because it can be expensive and rather time consuming to go back and forth to the pet store. More recently people in the US have been raising crickets as feed for human consumption. Just as crickets are nutritious for pets, they carry the same great nutrition for us. But the recent growth in cricket eating in the US has been driven more by the realization that crickets leave a small environmental footprint much smaller than the most commonly eaten proteins.

Like a lot of recent cricket farm start-ups, motivated by a 2013 report by the United Nations Food and Agricultural Organization about the future of food security, that more or less stated that insects were the food of the future. The report talked about how our current agricultural practices will not be able to sustain a growing world, especially as we grow to 9 billion people in 2050. We need new ways to farm, and the UN report highlighted that eating insects could be an important part of the solution. They are a great source of protein and can be produced using a fraction of the resources of traditional protein sources such as beef or pork.

What are the Reasons for Raising Crickets?

There are lots of environmental and nutritional benefits of raising crickets

Over half the world’s habitable land is used for agriculture. 77% of that is used for raising livestock.

This number is so much lower because insects are cold blood. When they eat, they are not using a bunch of the food’s energy just to make their body warm, instead, a high percentage of that food goes directly to building their body mass and to building protein.

This UN number, 2 kg of food to create 1 kg of live cricket weight is obtainable. When we feed our crickets a diet heavy in protein-rich grains, we can achieve this two-to-one ratio. if we elect to feed them more food weighs say 30% fruit vegetables that we salvaged from going to the landfill this ratio increases to highest four to one which is still much better than the ratio for beef and it is at par with chicken.

A similar comparison can also be made with water. UN report suggests that there’s a very large difference between the ratio required to produce a kilogram of cricket protein versus to raise a kilogram of beef protein. They don’t have the specifics in the report but they suggest that the number could be as many times as thousand times more superior for crickets.

The beef industry has been around for generations. They have received billions of research and government subsidies. Just imagine, how much we could improve these figures for crickets which are already at par better than chickens.

There are also large nutritional benefits. 16 grams of protein is produced per ounce of crickets and a bunch of iron and fibers.

Before you start farming crickets, you need to take some considerations, specifically when it comes to economics. The economics of cricket farming varies greatly whether you plan to raise cricket simply for your own personal use or if you plan to raise them at a commercial level.

Let’s say you’re raising cricket small-scale for your own personal use. If you have some spare space in your garage or your basement or even in a toolshed, you’ll probably have enough space to have two or three 30 gallon totes. You can find these plastic totes at any retailer. With this space, you should be able to maintain a population of about ten thousand crickets and of those ten thousand crickets you could probably harvest about a thousand a week.

How Much Does Small Scale Cricket Farming Costs You?

You can find Plastic Totes at any retailer for about $25.There are other materials that you need but if you’re doing it small-scale you can probably just look around your house and find a lot of these things that you aren’t using and that you can put to your backyard cricket farm for free.

After you spend this initial cost there is going to be regular maintenance cost that you’re gonna have to incur just to produce crickets.

For the initial investment of $25 plus maybe one to two dollars per week you should be able to harvest about a thousand crickets a week. If you’re raising crickets just for your reptile this is probably a great financial deal for you. There’s no way you’re going to need more than a thousand cricket a week. The pet store probably charges you ten to $20 at least for that amount of crickets. So this is definitely a good option here. If your plan is to eat them yourself, a thousand crickets would give you about 50 grams of protein, equivalent to two hamburgers or eight eggs, probably two meals worth of protein that you’d be replacing. So for a couple of bucks a week, to get two meals worth of protein, I think it’s a good deal. In other words, if you have space, you have the time and don’t mind the occasional escape cricket, it makes sense to raise crickets on a small scale.

If you’re gonna race crickets commercially, you’re gonna need a lot of space. On the low end you need a two to three thousand square feet on the high end you need over ten thousand square feet. You could probably estimate to pay 1 to 4 thousand dollars a month for the rent. Aside from the rent of your warehouse, you’ll need to have space in a commercial kitchen to
process your crickets if you plan on processing them. You can expect to pay probably $20 an hour just to use a kitchen. You have to pay for extra utilities, equipments and insurance at least $1,000 if you’re a small food producer and that number can just go up quite drastically depending on how many crickets you’re planning on producing. If you’re becoming a business, you’re gonna need to pay for different licensing, Taxes.

Most importantly you need to consider wages. If you want to get into farming, you need to make sure you are making enough money to pay for yourself and to provide a good wage to people who are helping you up.

I always saw these cost largely just to give you an idea of some of the costs you will incur in future videos we’ll go in more detail about the financial models associated frick environments so I just listed this list but don’t get discouraged that’s not my point of it.

Even with all these costs, cricket farming can be highly profitable but you just need to be large enough to overcome these fixed costs. As with most businesses the larger you get, the more efficient you should become. Which will bring down all your costs. But beware, if you get more efficient and produce a bunch of crickets, you need to make sure that there’s a demand to buy those extra crickets. When you start a commercial farm, think about: How you want to sell them?. Do you plan on selling them wholesale? If so, expect to get anywhere from $5 a pound to $20 a pound for your crickets. If that’s not enough to overcome your fixed cost then you should consider selling direct to consumer. That way you can raise more money per pound of crickets. In other words, if you want to raise crickets commercially, make sure you can achieve the demand required to cover your cost.

Raising crickets can be done easily and in a matter which creates quality protein with a much smaller environmental footprint than other traditional protein sources. This is why we want more people farming crickets and more people eating them forever. On a small scale, people can raise enough crickets to replace one or two meals a week at a cost of just a few bucks a week. If you want to succeed commercially, cricket farms are to get rich quick scheme. They’re like any other business where you need to ensure that you have enough demand to sell enough previous to generate positive cash flow.

What Do Crickets Eat What To Feed Your Pet Crickets