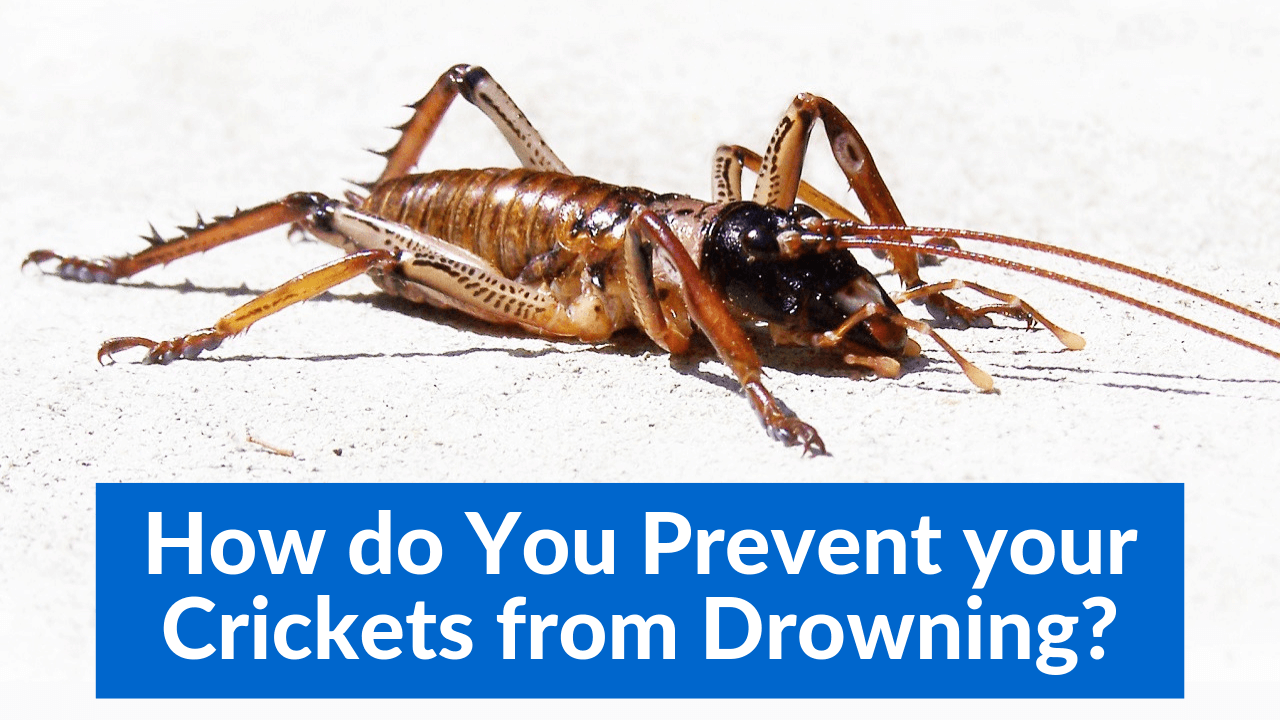 There are various ways to give water to crickets, before that I want to emphasize the importance of giving clean water.

Contents hide
1 How to Keep Crickets Alive?
2 How to Water Crickets? How Do You Prevent your Crickets from Drowning?
2.1 Various pros and cons of alternative methods of giving water to crickets.
3 1. Use Sponge
4 2. Use Paper Towels
5 3. Fruits or Vegetables
6 4. Spray Bottle Misting
7 5. Use Water Crystals Beads
8 Recommended Method

How to Keep Crickets Alive?

The number one way that crickets die is they’re drinking bad or contaminated water. It’s highly important to change your water often and it’s probably preferable to give them filtered water. Don’t use tap water.

How to Water Crickets? How Do You Prevent your Crickets from Drowning?

Various pros and cons of alternative methods of giving water to crickets.

Crickets are horrible swimmers. If you have any standing water, they’re inevitably gonna drown in it. That’s why giving water is so difficult for them. So to avoid giving them standing water, lots of people prefer to just give them something moist, something that they can get the moisture out of without actually having to be in the water.

One popular solution is to use a sponge. Wet your sponge, squeeze it out a bit, so that it’s not dripping wet and put that at the bottom of your bin.

One drawback to using sponges is that they dry out very quickly, especially when it’s 80 to 90
degrees in your brooder. You can get around this by moistening your sponge frequently at least once a day. Many people don’t like to do it that often especially if you have a lot of crickets to deal with. You could be spending your whole day moistening sponges.

Another drawback to working with sponges is that you need to make sure that your sponges don’t contain any chemicals which will kill the crickets. It’s difficult to understand which sponges
will work well though because even the ones that were labeled all-natural, dye-free, still can kill crickets whereas some of just the bright yellow sponges that looked pure chemical-filled can work perfectly fine.

Another alternative to sponges that’s very popular is to use paper towels. Just like a sponge, you can moisten a paper towel and put it at the bottom of your bin. Again make sure that it’s dye-free, so that the crickets don’t die from the chemicals inside of it. But like with the sponge they’ll dry out very quickly.

So a solution that a lot of people do and you can do this with sponges as well is to use a Chick Water Weeder. You can put Sponges or Paper Towels around the bottom of it. As the crickets stand on the paper towel and drink the water, the paper towel will stay moist as the water goes down to the Chick Water Feeder.

Another option is to provide little fruits and vegetables to the crickets. Cut the apples or cucumbers in small pieces and put it in the brooder. There’s enough moisture in apples and cucumbers, where they don’t need to have any water and they can just nibble.

One side effect of this is that the food does go bad pretty quickly, especially when it’s 80 to 90 degrees inside of your brooder. So after a day or two, you may notice that your fruit or vegetable is getting rather mouldy. So you have to go in and swap out new fruit and vegetables every single day.

I really would only recommend the solution for really young crickets. By the time the crickets get to be older, they’re gonna eat through your apples way too quickly and they’re gonna want to have some less sugary water.

Some people think that going through all this hassle of getting sponges and paper towel is just not needed and you just need to make sure that you administer really small amounts of water to the crickets. So that’s why people like to use just a spray bottle. It mists around the inside of their bins.

Now this works fairly well but there are two problems with it.

Another popular option is to use Water Crystal. Water crystals very much have the consistency of Jell-O and they work really well because the crickets won’t drown in them. They can climb all over them. You can put some at the bottom of the bin with the crickets and they’ll stay moist for half a week or so.

Two solutions depending on the age of the crickets. For babies use moist coconut husk because it’s a relatively sustainable material. You can get coconut husk in a variety of ways. you can get chunks of it or you can get it already ground up. It’s a little bit easier to work with
ground-up coconut husk. Fill coconut husk at the bottom of the water feeder. Change coconut husk once a week because it will get moldy. Before changing husk, make sure that there aren’t a bunch of crickets burrowed inside of it. You can push down around the perimeter on the coconut husk and that kind of agitate it enough so that crickets that are hiding in it will jump out of there and go up to someplace else of your brooder.

Do this for about the first 2 or 3 weeks of a crickets life and then switch from using coconut husk to giving them something with more standing water because at that point they’ll be big
enough where they shouldn’t be drowned. Use chick feeder and then put something in it so that they can climb out and not drowned. You can use rocks. Rocks aren’t gonna dry out. You can use them as many times as you want and if you put enough rocks in here, the crickets can easily find their way out of it. You just want to make sure that you clean and sanitize your rocks as well. Other things you could use are marbles or even scrap metal from aluminum screening.

Those are just some of the ways that you can give water to your crickets.

How to Setup Cricket Brooder? Tutorial 3