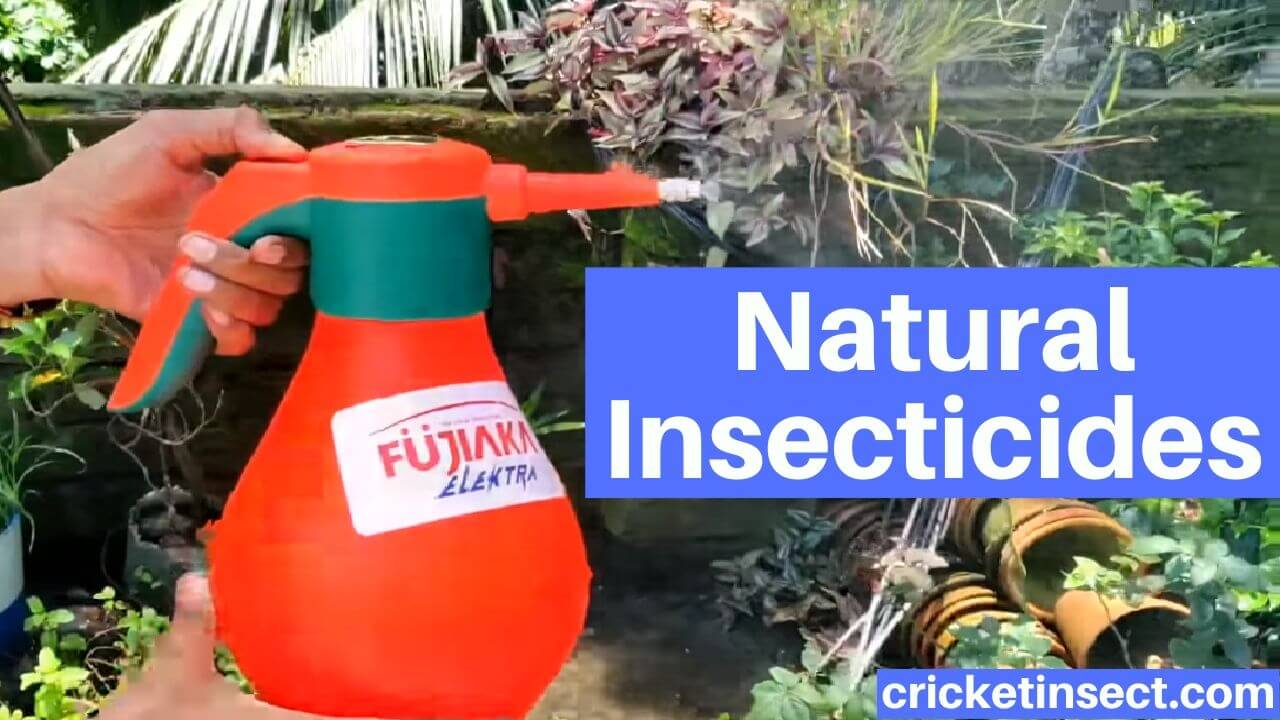 Natural insecticides normally do not affect wildlife and water supplies and although it is a good idea to still use precautionary measures while utilizing natural insecticides and to use them carefully in their application. Compared to synthetic insecticides natural insecticides, in general, are milder and tend to oxidize and dissipate faster within the soil and off of the plant. Organic gardeners would never use chemically derived products if the use of insecticides is necessary they would concentrate on friendly insecticides homemade from safer substances that were less toxic to them.
Systemic natural insecticides battle pests through ingestion, used as part of a structured pest management program which includes traps for monitoring and catching pests and beneficial insects to control pests in their formulating phases. Natural pest control can be bought in stores or home improvement shops but for a tenacious pest problem, contact a professional exterminator that specializes in natural and environment-friendly ways to kill insects. Natural Insecticides are made up of chemicals, and chemicals do not have to be our enemy we just have to minimize their use around the home, what makes organic chemicals different is the source of those chemicals.

The sales of natural insecticides have increased over the last couple of years and so have the fruit and vegetables made insect-free mainly because of their popularity. They are based on chemicals occurring in nature, like nicotine, pyrethrum, and neem extracts. These days scientists are working on isolating natural chemicals from the insects themselves so juvenile pests cannot develop into adults. Organic insecticides are widely available and are often spouted as being fully safe but these are extremely speculative claims.

Labeling natural products as ‘safe’ simply because they are derived from organic sources is unfortunate, such comments as ‘contains no chemicals’ and that they are ‘harmless to children and pets’ are not only extremely unethical but also give the public a false sense of security whereby they may misuse such products, furthermore, some products generally considered to be natural or organic can be more toxic to mammals and may have higher systemic tendencies than some synthetic insecticides, just because they are natural or organic does not mean they are safe.

Use lemon and orange peel with mint and lavender leaves, soak overnight, add vegetable oil (2 cups) in that and mix together in a blender. To a tablespoon of this mixture, add 1 quart of water. Add this to a spray bottle and apply it to your plants. The concentration should be monitored and adjusted for optimum results.

For fleas… Add a little sulfur to your dog’s drinking water, I know the dog will probably shy away from the water at first but if you gradually increase the solution over time your dog should get used to the taste eventually. Another method is to put 1/2 cup vinegar into the final rinsing water of your dog’s bathwater. Do not spray your cat with the above homemade citrus remedy as it can be toxic to cats.

Garlic is a natural plant that is grown around the world.? It can be used to keep insects off garden or farm plants. Mix with water and a dash of dish soap and this easy solution will ward off many insects. Garlic spray is the most commonly used natural insecticide in houses because it is easy to make. All you have to do is to chop raw garlic (90g) and soak it in 2 tablespoons of paraffin oil for at least 24 hours.

Nicotine is sold as a liquid concentrate for use against insect pests on vegetables and fruit. Nicotine can be absorbed by plant leaves and remain there for several weeks. It’s probably safest not to spray nicotine on eggplant, peppers or tomatoes. For example, nicotine has an LD50 (rat oral) of 50 to 60 mg/kg (milligram of toxin per kilogram of body weight). Add to that 3-5 drops each of lavender, lemon and pine essential oils. Shake well and often. Adding sugar to the powdered mixture reduces the rate of evaporation because sugar does not give up the water very readily, and, therefore, the borax is allowed to remain active longer. When carob is used as the source of sugar rather than processed cane, the same longevity is observed.

Soap in lukewarm water acts as an insecticide, actually. In fact, they are technically referred to within the gardening and pest control industries as insecticidal soaps. Soaps are used in several different types of mixtures one point to note is that soaps are washed away with rain or automatic sprinklers so dry weather is a pre-requisite.

Oils from soaps prevent oxygen from reaching insect eggs and adult pests, which suffocates them. Oil of pennyroyal contains pulegone, a potent toxin that can cause death in humans at doses as low as one tablespoon when ingested. At lower internal doses it may cause abortion, liver damage, and renal failure.

Diatomaceous earth is a fine, light powder that is slightly abrasive but highly absorbent. It works as an insecticide because it absorbs and removes the protective waxy covering of insects that are exposed to it diatomaceous earth, made from the skeletal remains of microscopic marine creatures, kills fruit tree pests by slicing through an insect’s protective exoskeleton. Diatomaceous earth is excellent for eliminating ants, aphids, flea beetles, fleas, earwigs, sowbugs, mange mites, flys, ticks, etc.

Rotenone and pyrethrum are both very well known and widely used natural insecticides derived from plants. Rotenone is extracted from the roots of the Derris tree of Asia and the Cube tree of South America. Rotenone is being commercially used as a broad-spectrum insecticide in the fruit and vegetable market as well as for the control of fire ants. Although rotenone is an effective garden insecticide, it is harmful to fish and should be used with care.

Rotenone is extracted from the roots of derris plants in Asia and cube plants in South America. In our environment, this general garden insecticide is harmless to plants, highly toxic to fish and many insects, moderately toxic to mammals and leaves no harmful residue on vegetable crops. Rotenone and sabadilla dust can be considered an exotic natural insecticide because they are made from plants that exist in other countries. Sabadilla can wreak havoc on a honeybee population, though, and is a short-term insecticide. Rotenone has low toxicity for mammals. It is very toxic to cold-blooded animals like fish and frogs, so do not use it near farm ponds, or open water in Africa it has been used for centuries to kill fish for human consumption.

Pyrethrum extract is the natural extract from the pyrethrum flowers. The extract contains about 25% of the active pyrethrins that make it effective. Pyrethrum and PBO are added to increase insect movement by stimulating their nervous systems. This brings the insects into contact with the silica dust more readily. Pyrethrum, discovered around 1800 in the Transcaucasian region of Asia, is the ground-up flowers of the daisy. Pyrethrins (most always plural) are the insecticidal components of the flowers.

Pyrethrin is quickly broken down in the bodies of mammals. It also breaks down when exposed to sunlight or water. Pyrethrin compounds have been used primarily to control human lice, mosquitoes, cockroaches, beetles and flies. Some “pyrethrin dusts,” used to control insects in horticultural crops, are only 0.3% to 0.5% pyrethrins, and are used at rates of up to 50 lb/A. Pyrethrins are also rapidly decomposed by mild acids and alkalis. Stored pyrethrin powders lose about 20% of their potency in one year.

Pyrethrum or rotenone sprays will kill lice, fleas and ticks in your house to keep them off your pets. A natural insecticide called neem oil can be used directly on a pet to get rid of fleas. Pyrethrum is toxic to fish but less toxic to mammals than synthetic pesticides. It is biodegradable and breaks down easily with exposure to light.

Pyrethrum marc is sold to farmers at about US$5 per 50 kg bag, therefore, it is quite cost-effective. Pyrethrum is a relatively low toxicity natural insecticide and since it breaks down quickly, it generally has a low environmental impact as well. For these reasons it enjoys a reputation of being “safe” but it is deadly to insects and other “cold-blooded” life.
Pyrethrum daisies have been used as an insecticide for over 2000 years. Found as a wildflower in the Balkans and in the mountains of Persia, Persians used the powder to protect the stored grain.

Neem is effective against rots, mildews, rusts, scab, leaf spot, and blights. It works as a barrier not as a fungicide. It makes a great garden spray as a general tonic for your plants and soil. Neem Oil Soap, Hot Pepper Wax, and Garlic Barrier all have this potential repellent capability when applied properly on the tops and the bottoms of leaves of the target plants. The repelling effect will last for several weeks to a month depending on the weather conditions. Neem suppresses an insect’s desire to feed and disrupts its hormonal balance so it dies before molting. Field tests have shown neem to be effective against a wide range of insects from aphids and caterpillars to corn borer and squash bugs.

Did you know that neem products are consumed by humans and used in medication? When treating your plants for pests exposure to neem looks like a non-issue for you, the plants or the environment. Neem oil is derived from the Middle Eastern neem plant, and it is an effective insecticide against cabbage loopers, aphids, box elder bugs, thrips, whiteflies, and cutworms, among others. Neem oil is a good choice as a pesticide as it is non-toxic to mammals, humans. While it fights many scourges, it’s non-toxic to birds and most beneficial insects.

Acephate (Valent’s Orthene), has systemic characteristics. These qualities make this product particularly effective for controlling insects, such as aphids, which suck plant juices. If the plant tissues contain acephate, the aphids will ingest the insecticide directly when they feed.

Boric acid, when mixed with propylene glycol (a non-toxic version of anti-freeze), has proven to be very effective against many types of termites. The glycol helps the solution to penetrate into the wood and become a part of the wood fiber. Boric acid is deadly to cockroaches but is low in toxicity to people, pets and other nontarget animals. It is also odorless and contains no volatile solvents. Boric acid has been used for many years for things we would not even think of. Did you know that it is used to help flame retard cotton fibers?

Boric powder has often been called “roach powder.”.Get a squeeze bottle of it, or make up your own homemade version. Squirt the stuff along floorboards and behind appliances. Boric acid powder, insecticide dust, and other earwig powders and dust containing pyrethrins are effective earwig control agents in the home. Outside of the home, earwig control agents should be spread 6 to10 feet from the foundation outwards, all the way around your home.

Natural Pesticides You Can Use in Your Home

Homemade Insecticide to Get Rid of Crickets and Other Insects