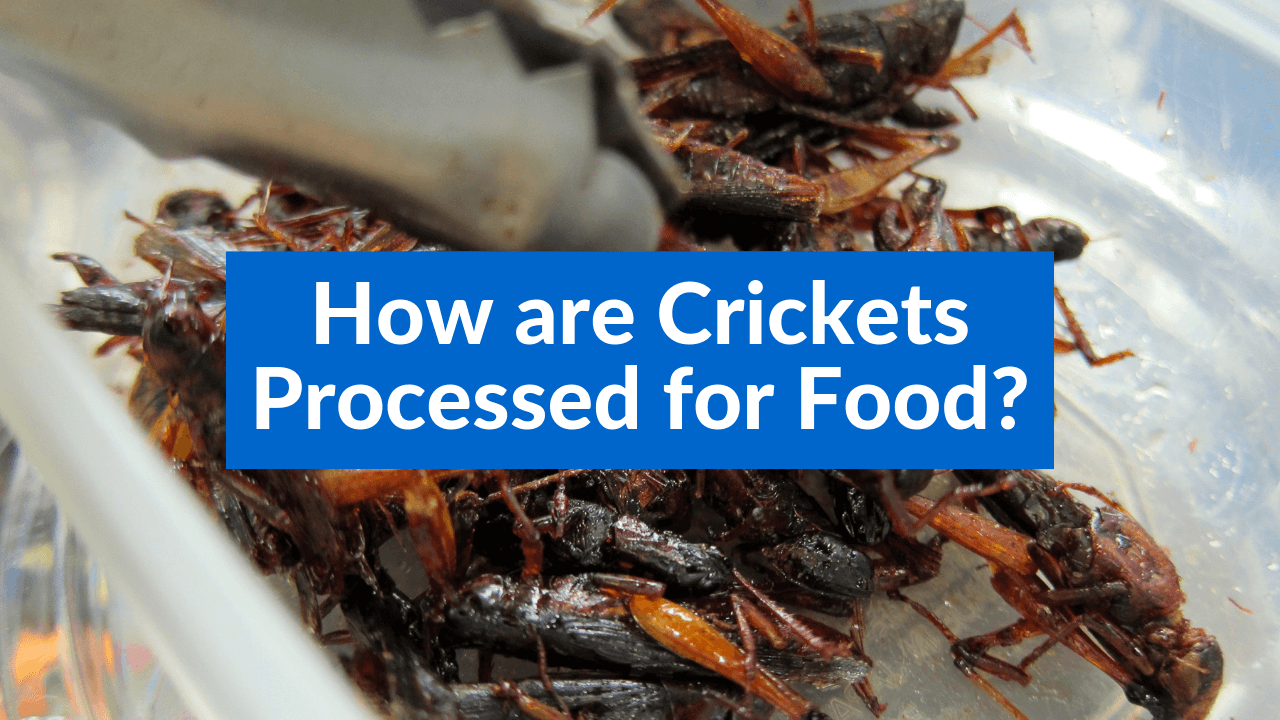 Information about processing and storing crickets in a way that is safe to eat. The processes used in Craftcrickets farm.

Contents hide
1 1. Keep crickets in the freezer for 1 day
2 2. Rinse crickets thoroughly
3 Frozen Crickets
3.1 Why would you want to eat frozen crickets?
3.2 Why not just process the raw crickets?
4 Dried or Roasted Crickets
5 How to make cricket flour?
6 Storage

1. Keep crickets in the freezer for 1 day

The most common way people do this is probably by freezing them. Crickets are cold-blooded, they can’t survive very long in temperatures below freezing. When placed in the freezer, crickets will go into a state of hibernation. They can only survive this hibernation for a few hours. This, of course, is true of the wild as well. On a cold night with a temperature
dip below freezing unless the cricket has burrowed himself into some warm place against the building or in some warm substrate he will go into hibernation at night and if the Sun doesn’t rise that crickets not going to wake up, it’s going to die.

Most people will tell you you don’t need to freeze crickets for the course of a whole night, just three or four hours will do, that’s enough to get that hibernation to switch to death. If you recently remove the crickets from the freezers, there’s a risk that those crickets are going to resurrect again. This is not always something that you want especially when you’re working with your crickets and froze in the kitchen. You have a pile of frozen crickets sitting there on the counter and also they start jumping around and what was going to be your dinner has turned into a pest that’s all-around your house. So, I prefer to keep crickets in the freezer for 1 day and process them the next. Now that we have frozen our crickets and they’ve been frozen long enough where we were assured that they’re no longer alive and they’re not going to be jumping around in a few minutes.

The next step regardless of what you’re going to do with the crickets is to rinse them off. Crickets probably are going to have some residue or poop on them and if they’ve been frozen, these things are clumped out to them. We want to get that off. Put the crickets under some cold water. Make sure you rinse thoroughly all the crickets.

Once the crickets are cleaned, you can either refroze them and have frozen crickets or you can further dry, process and make them into cricket flour.

If you just want to have frozen crickets, that’s a good product and you can sell these frozen whole crickets too. Cricket that has not been processed but it’s only been frozen and rinsed, treat it very much like any raw meat. Make sure that you cook it thoroughly to at least 160 degrees to kill the bacteria or microbes that may be living in it. Make sure you clean and sanitize the utensils and the surfaces that that raw cricket can touch.

Why would you want to eat frozen crickets?

Why not just process the raw crickets?

Frozen crickets offer the most versatility in food preparation. It allows you to add additional flavors and be the most creative with them. Compared to dried crickets either as flour or as whole crickets, the crickets will have more flavor and they’ll more easily take on the flavor of other foods and because they haven’t already been processed they can be fried or baked for a longer period of time without a risk of them burning.

Another option is to dry or roast your crickets. Dried roasted crickets have been further processed from the frozen steak, removing most of the water content and making a shelf-stable product.

This step is not entirely necessary but just a precaution, as the microbes should all die in the
drying process. This reduces the risk of foodborne illness and unfortunately also reduces the flavor and some of the nutrition lost into the boiling water. If you want to be safe and boiling your crickets but you’re concerned about losing some of that nutrition to the water, we recommend you save that water and use it as an nice cricket broth in your cooking and soups

After boiling these crickets, dry either using a convection oven, a conventional oven or a food dehydrator. Bake crickets at 210° F for about 3 to 4 hours. Weigh the crickets during the process to make sure that they have lost 72% of their water weight.

In a convection oven, the crickets come up very much like puffed rice. If done in a conventional oven, they’re more crunchy.

If in the prior step after we rinse them, we didn’t do a very good job straining them we’re gonna have to bake them longer because they’re gonna be a lot wetter.

There are two ways that we can really determine when they are done.

You do not want to bake it much longer after this point because then you’re just going to risk burning your crickets. So, at 210 °F it takes about 3 to 4 hours for but this depends on a lot of factors.

Some farms prefer to cook at a higher temperature upwards of 300 °F. This means that they don’t have to cook for as much time. We don’t recommend it as it creates a more of a burnt taste. There’s also a higher likelihood to burn the crickets.

You can also roast or smoke the crickets. You can smoke them at 200 to 225 °F degrees for about 3 or 4 hours. You should know that each form of processing does yield a different taste.

So after you baked the crickets, let the crickets cool down and then package and sell them as dry whole crickets.

How to make cricket flour?

Many people prefer eating their crickets as cricket flour. Fortunately, this is only an additional step and can be done at home in a pretty easy way. Depending on the recipe, grind your dried crickets slightly differently. For example, when baking brownies, you want a very finely ground cricket, so that you don’t really notice that there’s anything different with the brownies to conventional brownies. However when you are making cricket burgers and you really want to showcase that crickets are part of the ingredients, grind them coarsely. So that they add a little bit of texture to the cricket burgers.

You can grind your crickets at home using a food processor or coffee grinder. A rule of thumb is that to get one cup of ground crickets, you need about two cups of whole crickets. If you want it finely ground, you’re going to need even a little bit more than that.

If you want to grind crickets and sell the flour commercially, you’re going to want to have a proper mill. These commercially ground crickets are superior to the crickets that your ground at home because they’re going to be a lot more finer and consistently ground.

Dried crickets and cricket flour should be shelf-stable and will not mold if you keep it in a cool, dry place. Crickets are hygroscopic, this means that they absorb moisture from the air. If crickets are exposed to moisture, they can form mold within as little as 48 hours.

To be extra safe, some people take their crickets and they store with the freezer. Aside from ensuring that the crickets stay fresh these frozen dry crickets also work well in smoothies or well work well eating straight out of the bag just with the little extra crunch from being frozen.

If your crickets do go bad, you should be able to notice visibly very quickly. Mold can overtake the entire package or container of crickets in just a few days. If you have any mold on crickets or they taste a little mushy, throw them out.

How to Take Care of Crickets, Maintenance, Cleaning and Feeding Tutorial 7